A while ago I started another attempt to touch up my Chinese. Hence, I had a Beijing-Chinese lady coming to our home as a tutor. I was able to make some progress because she did not speak any English at all. Although, I strongly felt that she did an excellent job, my wife substituted her away. My wife explained that this lady was too pretty. That is correct. However, I see a strong correlation between the success in learning a language and the attractiveness of the teacher.

The next tutor who was selected by my wife had the weight of a young whale, smelled continuously after some strange food and had the feet of Yeti. The issue with the feet became obvious when he parked his dinghy-sized shoes next to my wife’s in front of the house. He lasted for only three lessons until I had to end this exercise because Bud Spencer moved closer and closer to me during our Chinese lessons resulting me sitting “in touch” with him during the last one. The next lesson he would have spent on my lap I assume.

Chinese language is not complicated – there is no grammar. However, the concept is totally different to any western language. There are no letters. Characters form words. Therefore, a key task of all Chinese is the never-ending learning of Chinese words, their writing and their pronunciation. After primary school they have to master more than 2000 words, more than 3000 are needed for reading a newspaper. Well-educated Chinese master about 6000 words. 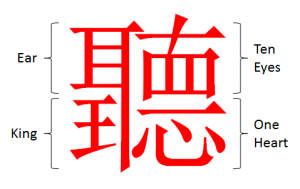 Chinese is a very pretty language. Especially traditional Chinese words have a way of expressing the culture in an interesting manner.

Take the traditional Chinese word for listen, Ting 聽. Ting is made of a big ear, a small king, ten eyes and one heart. One heart stands for “wholeheartedly”. Ten eyes mean “full attention”. Hence, you could translate Ting into something like “Listen with your ears and your heart by treating the speaker as a king whom you pay full attention”. Even today, after 3000 years, we would do well following this rich wisdom.

In order to use the language you ought to understand the culture. Years ago, an American fast-food-chain advertised their products in China with the slogan “We make the best Chicken”. No Chinese would enter this restaurant. Who wants to be associated with someone who says “We are the best in prostitution”?

Chinese is a very interesting language, that grew over thousands of years. Many words are made by combining a few other words. For example, the word for wood is 木. Two woods give you the word for tree 林. Three woods make a forest 森.

This does not always work as logical as that. For example 車 stands for a car. If you take three cars together, you don’t get a car park, but the word for rumble 轟.

Chinese contains a lot of wisdom that is just part of the language. Whereas the word for man 男 shows a rice paddy on which someone is using his muscles – most likely the man, the modern word for women 女 shows a person making a big step – living the high life.

Code of conduct is also built in. Three women give you the Chinese word for adultery 姦 .

In Chinese conversation, it is key to pronounce the words correctly. In Mandarin Chinese, there are four different tones. If you don’t use the correct intonation, you end up having totally different meaning in your words. Dumplings belong to the long list of my favourite Chinese food. The pronunciation for dumplings is somehow like  „Jiao Zi“.  When I order my favourite dumplings in a rush without watching my intonation, I frequently get a mischievous smile from the waiter that turns into loud laughter after he returns to the kitchen. I have just ordered toes for dinner.